Much Mayr: My "Spanish" story 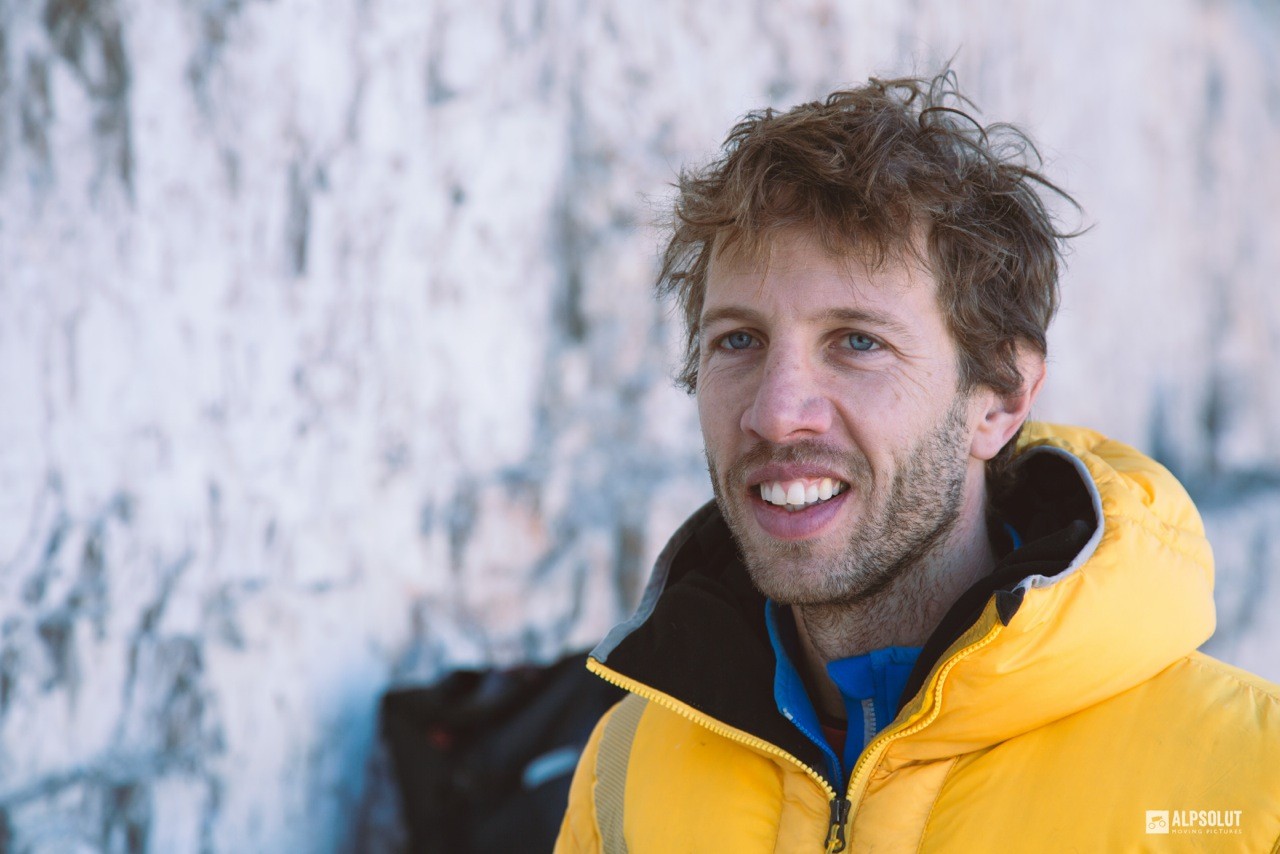 It's 27th August 2015, and the Austrian climber Michael "Much" Mayr, achieves the top of the Spanish Route, a line opened in 1977 by Gallegos' brothers, Lonzano, Carillo and Gomez  on the North Face of Cima Grande di Lavaredo.
We asked him to tell what it means for a climber go back to the origins of the alpinism, climbing on one of the most beautifull and inspirational walls of the Dolomites. And this is what he told... My Spanish Story (by Much Mayr) I still have Bubu’s charming facial expression in front of me, which always reminds me of Roberto Benigni. Almost 12 years ago, in his typical passionate, amiable way, he told me about the adventurous, scary Spanish Route and its incredibly rusty, tiny bolts. And also about its crux pitch with the horizontal roof, that he could “only” climb A0, with three points of aid, and that he had graded 8a+, A0. When I asked him if it might be possible to free or whether he would try again, he energetically shook his head, laughing .
I wanted to give this pitch a try, but it took nine years until I finally saw the roof in question from up close. And already back then, many of the holds were moist or even wet, but I felt like it could go, maybe not for me, but at least in principle.
It was only this year that the time was ripe: Guido Unterwurzacher joined me and from the start, he was very motivated. We found different solutions for the five, six moves that lead along slopy crimps to a small hold on the edge of the roof, which then leads to a jug. For Guido, who is a bit shorter than me, the moves up to the roof and also the one to the jug were not exactly easier.
I think I fell on the move to the jug on the second or third time on the route. It was close, “next time” it would go for sure, with slightly better conditions. There was apparently just a tiny bit missing,  but it was always a bit too much. I couldn’t believe it. Again and again, we drove to the Tre Cime. Of course one has to take into account that we developed a lovely routine, that neither Guido nor I want to miss, with the usual treats like Cappuccino, Pizza, sunsets and sunrises … free time to conquer the useless.
Despite the unusually good weather this summer, parts of the roof were always dripping wet. The air condensated on the cold north face, leaving a film of water. Sometimes, we could see from the base that it would be even worse than usual. Damn. Not even a reasonable attempt would be in the cards.
At some point I stopped keeping count, but I think I fell at least 20 times on the move to the jug above the lip, much more often than I ever fell on the same move on any sport climb …
On the 27th of August, I hung on to the jug on my second attempt of the day. I only barely caught the jug, but I controlled the swing and got my leg onto the edge of the roof. For the first time, I managed to continue from there. Finally!!
Unfortunately, Guido was not there yet. We had several exciting pitches still waiting for us, some of them with very long runouts. I led the two demanding 7c’s and a 7a, and we swapped leads on the “easy” remaining pitches. On the last couple pitches, which we had never climbed before, we were surprised to see that the “new” bolts had been removed from the anchors! The rusty old bolts were still there, of course. Shortly after 7 pm we reached the ledge – hard to believe – we will miss something. Facts  Cima Grande di Lavaredo
Spanish Route FA: M. A. Gallego, M. Lozano, J. Carillo, A. Gomez. (1977)
FFA: Much Mayr with Guido Unterwurzacher (27.8.2015)  5 bolts replaced: 2 on p3 and 3 on p6 VI A3 or 8b+/8c
450m, 13 pitches 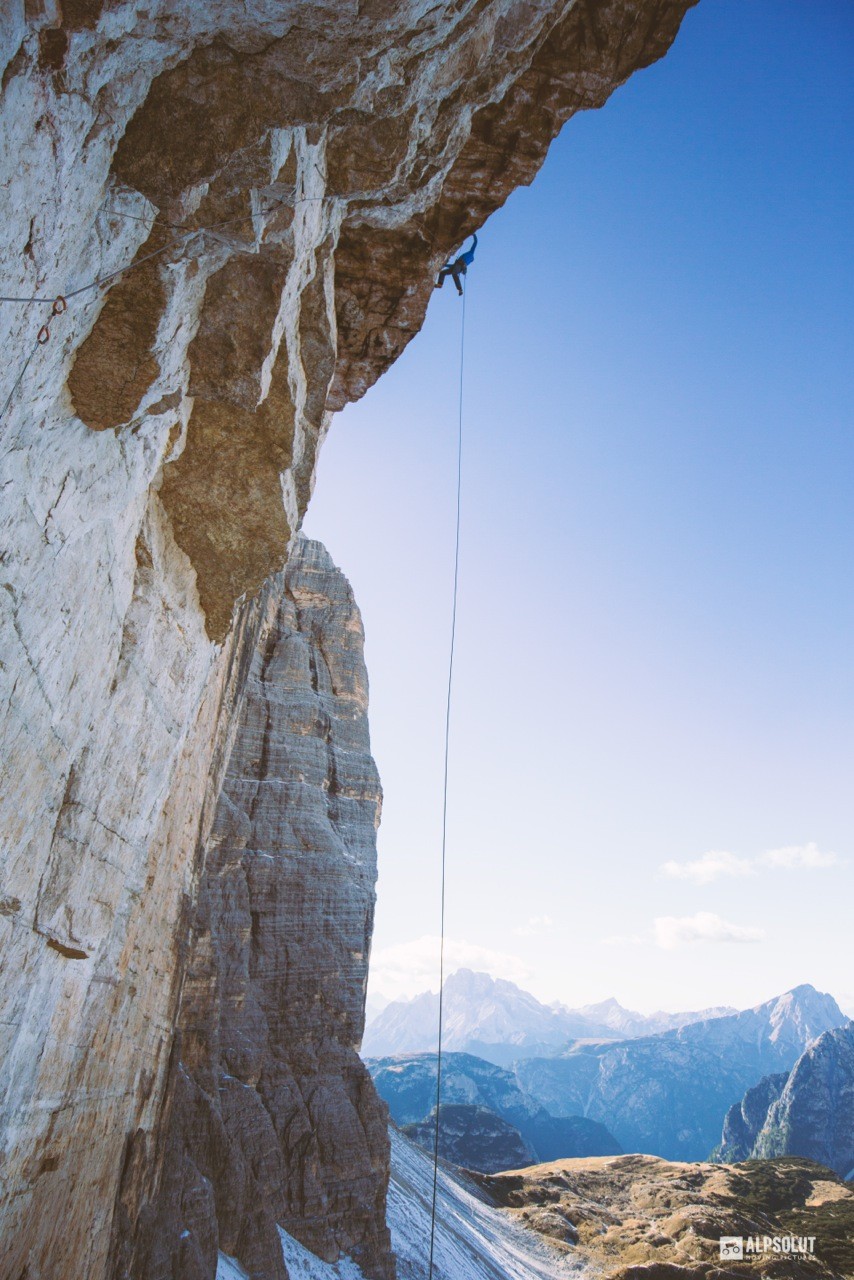 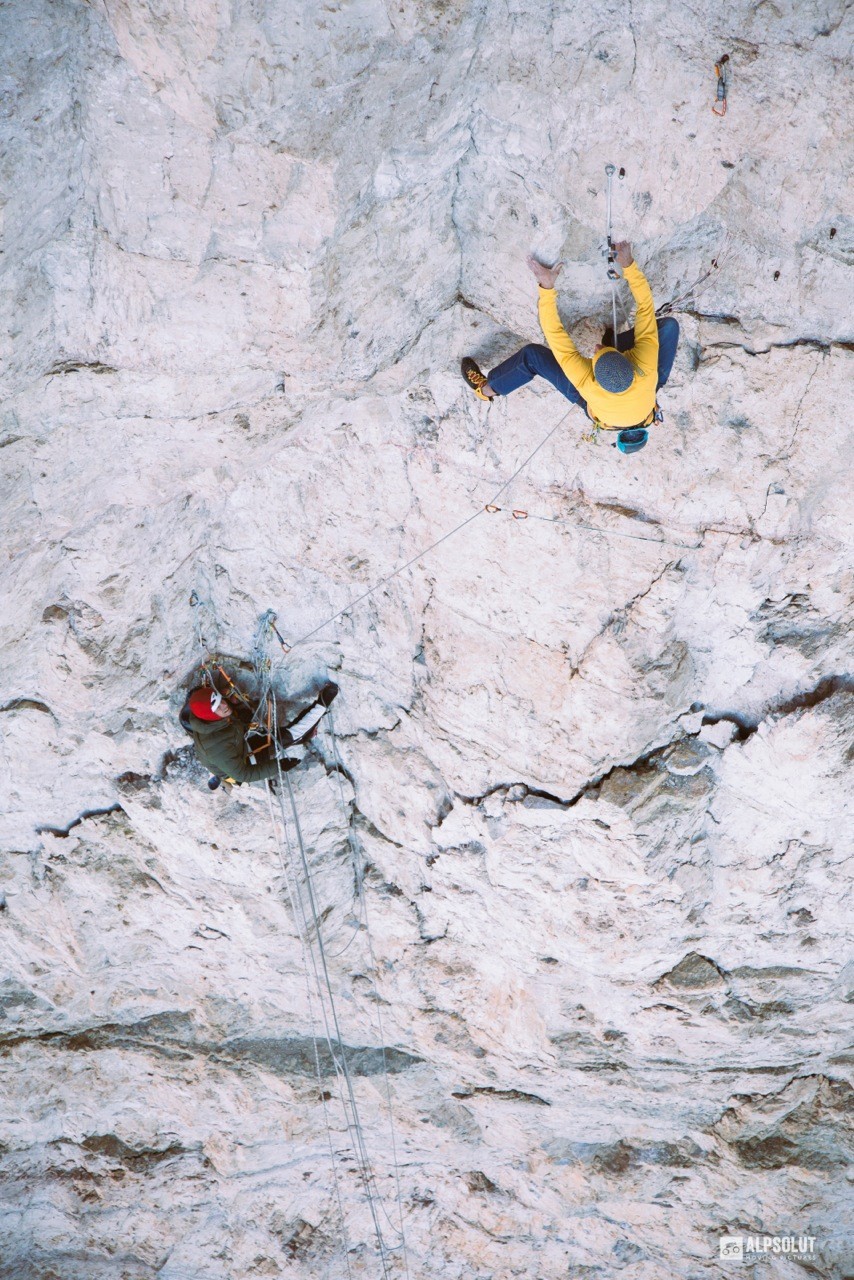 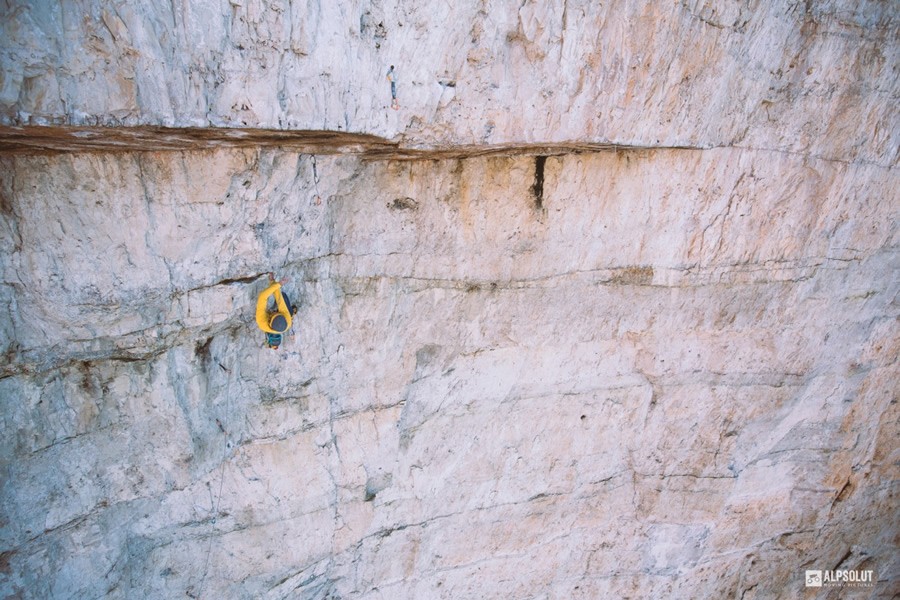